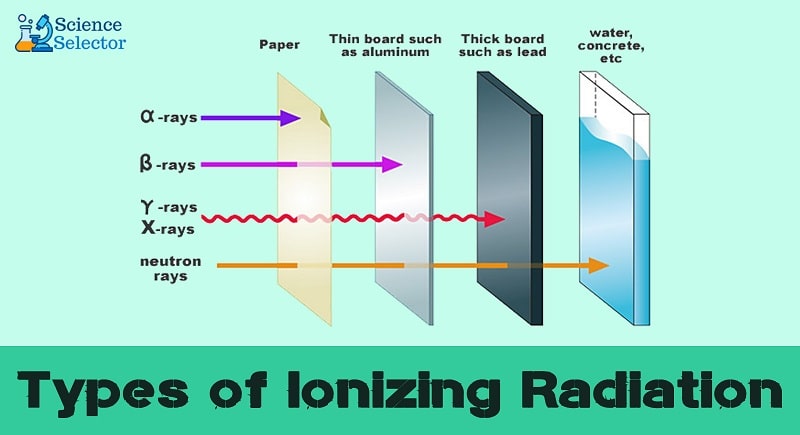 An atom is the tiniest unit that builds up a matter. It is made up of a nucleus and consists of protons and neutrons. The component has electrons in its surrounding that attain an orbital behavior within the nucleus.

The number of protons presents checks for oxygen and hydrogen elements, whereas the number of neutrons present has a relative impact on the isotope. Sometimes, isotopes tend to be unstable. They, therefore, have to release energy to become stable.

These unstable atoms go by the name of radioactive. Radiation is the energy that these atoms give out. Therefore, when the radiation gains suitable energy to get rid of electrons in its surrounding, you call it ionizing radiation.

We shall look more into the ionizing radiation concept below. Also, the article will highlight its several types, uses and comparison to other ideas.

What is ionizing radiation?

The process releases differently charged particles, a molecule with a positive charge alongside a free element with a negative charge.

Some of the natural materials might include uranium, thorium, and potassium. These are standard elements found in the earth’s environment. Alpha, Beta, and Gamma radiation rays get exposed when the ionizing radiation process takes place.

Natural radioactivity takes a certain proportion of the air we consume daily. Also, it occupies our food, water, and our body systems.

Conversely, the primary artificial sources of ionizing radiation might include medical and industrial consumption.

Some of the radionuclides that produce alpha particles might include Uranium-238, Americium-241, Radon-222, Polonium-210 and Thorium-230.

Examples of radionuclides that eject beta particles might include Strontium-90, Phosphorous-32, and Carbon-14.

For instance, generally, a carbon-14 atom consists of six protons and eight neutrons. The composition illustrates its unstable state. The atom needs to eject radiation by transforming a neutron into a proton and releases a beta particle to be stable. The process involves a gain of a proton and loss of a neutron. Therefore, the unstable Carbon-14 changes to a stable element, Nitrogen-14, comprising seven protons and seven neutrons.

Gamma rays are popular types of ionizing radiation. They are electromagnetic photons with supreme energy. These types as well come from the nucleus of an unstable and excite atom.

They have an ideal type of energy that can move to enormous distances at a higher speed. Examples of radionuclides that can give you out gamma rays might include Iodine-131, Gallium-67, and Iridium-192.

Positrons are positive-charged elements. They are also quick electrons coming from the nucleus of specific radionuclides. Radioactive elements with a lower composition of neutrons and protons can give out positrons.

Fluorine-18 (F-18) is an excellent example of radionuclides that emit positrons. Most health facilities utilize it for the Positron Emission Tomography (PET) scanning process.

The unstable state for an F-18 atom consists of a balanced composition of nine neutrons and nine protons. The element attains stability after converting a proton into a neutron and then discharges a positron. The loss of a proton and gain of a neutron type of event gives rises to a stable oxygen-18(O-18), having eight protons and ten neutrons.

These are electromagnetic photons with higher energy discharged from the exterior part of the nucleus. The ultimate difference between gamma rays and X-rays is that X-rays form from the outer part, unlike gamma rays from the inside section of the nucleus.

Some of the popular radionuclides might include Iodine-125 and Iron-55. Also, machinery with the X-ray tube can produce X-ray.

Neutrons are particles with no electrical charges ejected from the nuclei of several radioactive radionuclides.

These nuclear particles move at a higher speed. Neutrons are a unique type of ionizing radiations with a higher capability of making elements radioactive. Several sources produce neutrons, including nuclear fission, neutron generators, and some fusion reactions.

Non-ionizing radiation is a section in the electromagnetic spectrum that has less energy to establish ionization. It might include electric and magnetic fields besides microwaves and ultraviolet.

The radiation is precisely at the long-wavelength spectrum end. It might consist of sufficient energy to excite elements and have a quick vibration.

The non-ionization radiation has a lower frequency, unlike the ionizing radiation. All of its different types, including Infrared, have a range with lower frequencies. With these minimum frequencies, radiation types with the content of 100 Hertz or below tend to have longer wavelengths.

Uses of an ionizing radiation

Ionizing radiation is a significant player in the healthcare industry. Most health facilities utilize ionizing radiation in diagnosing ailments for patients in most parts of the world. Research works have reported the numerous benefits of using radiation-related applications in medicine operations.

Today, it might be challenging to run a health facility that lacks imaging applications and procedures that lack images.

Some of the popular applications of ionizing radiation in healthcare might include:

With the help of ionizing radiation, the diagnostic radiology field establishes images of human internal organs that help improve patient status during diagnosis. Physicians can comfortably analyze patient’ response to medications besides forecasting the occurrence of an illness.

Modern diagnostic radiology today enables faster diagnosis and monitors a pool of diseases. The diagnostic radiology operations use machine x-rays that pass over the human’s body and employs receptors for detection. These receptor systems produce compelling images of the body organs under study.

Different organs in the body have varying x-ray absorption. It contributed to the existence of multiple imaging techniques. Diagnostic radiology is available in Computed Tomography (CT), Cardiology and Dental Radiography, only to mention a few.

The radiation therapy method can act as a primary treatment technique or a curative one. The prescription to beat down tumor spread works by limiting the radiosensitivity present in normal tissues. The side effects of the radiation treatment might take time or showcase early.

Some of the side effects might need treatment to disappear. In contrast, others might work out spontaneously. It should not discourage you from enjoying the pool benefits of using radiation therapy.

There is increased use of ionizing radiation in the biomedical research field. It takes place in a laboratory and relies on several animal models.

The introduction of tumor xenograft models enhanced implanting of human-patient tumors to animals with immunodeficient disorders. It is a helpful tool to use in research when identifying the repercussions of ionizing radiation on cancer.

However, different research studies found a significant need to approve all radiation procedures to eliminate related risks from exposures. There should be an appropriate dose of the prescription when introducing them to humans.

The medical field uses radiation substances known as radio-pharmaceuticals for the treatment of a whole range of diseases. Nuclear medicine provides unique diagnoses in cardiology, neurology, and urology.

Human patients can introduce these radio-pharmaceuticals into their body systems through injection, inhalation, skin or consuming as food or drink.

Ionizing radiation is a top priority for multiple industries. With the help of technology, ionizing radiation keeps improving with days, bringing along vast benefits to individuals, especially patients.

Cancer patients can now get valuable treatment and diagnosis that gauges tumor growth and forecasts infections’re-occurrence. The article provides you with helpful information on ionizing radiation.

It pointed out the various types and applications and explained its crucial difference with non-ionizing radiation.

Indeed, ionizing radiation does more good than harm to its users.